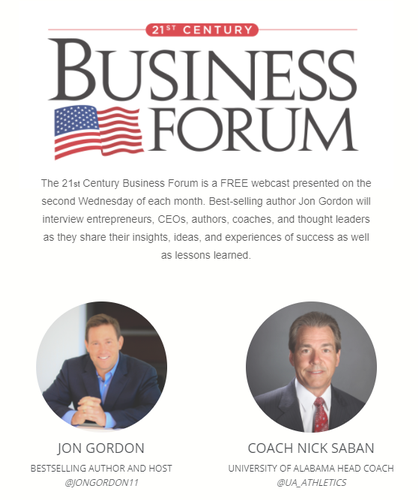 Event Description:
Join Jon Gordon as he hosts this monthly webcast featuring thought leaders and the best in business.

Saban has won the most national titles in college football history with seven national titles as a head coach. Saban and the LSU Tigers won the BCS National Championship in 2003. He also won the BCS and AP national championships in 2009, 2011, and 2012 with the Alabama Crimson Tide and won the College Football Playoff championships in 2015, 2017, and 2020. Saban is the first coach in college football history to win a national championship with two different Football Bowl Subdivisions.

Nick Saban and his wife, Terry Saban, are the co-founders of Nick’s Kids Foundation – a foundation they established in 1998 in honor of the late Nick Saban, Sr. to raise awareness and provide resources for organizations throughout the state of Alabama and the Southeast. The foundation has distributed over $9 million to these organizations.
Location:
Zoom
Date/Time Information:
Wednesday, April 14
11 AM
Fees/Admission:
Free
Set a Reminder:
Business Directory Events Calendar Hot Deals Member To Member Deals Information & Brochures
Go mobile with MyChamberApp!

A proud member of